Signatures in replies and forwards

CodeTwo Email Signatures for Office 365 adds professional server-side signatures and disclaimers to emails sent by Office 365 (Microsoft 365) users in your organization, depending on the configured rules. The program automatically detects the first and subsequent emails in a conversation, and also lets you further configure how email signatures are inserted in replies and forwards. But what is unique about the program is that it adds these signatures directly under the body of reply or forward messages, not only at the very end of the email conversation.

You can decide to handle a signature/disclaimer in one of the following ways: 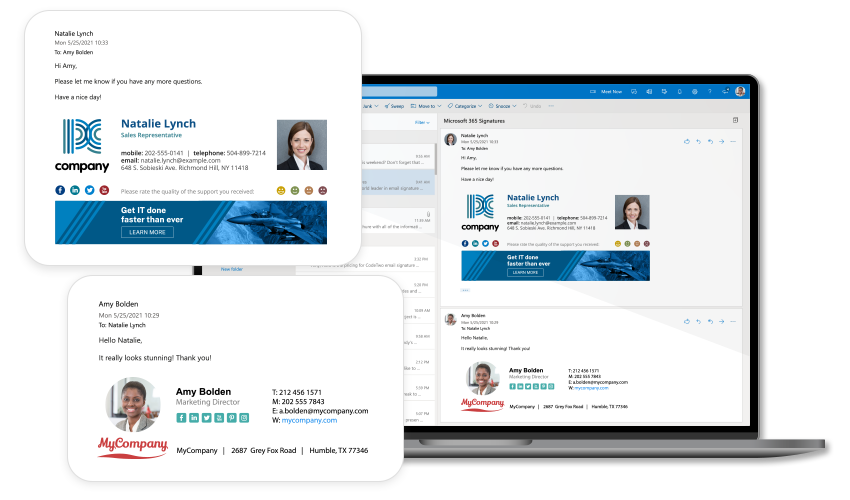 But that’s not all CodeTwo Email Signatures for Office 365 can do in this matter. Probably the most eminent feature regarding replies and forwards is the ability to add an email signature/disclaimer directly under the body of the most recent message. Email clients, as well as Exchange Online, add signatures at the very bottom of the conversation, leaving the older messages between the original reply/forward and the signature itself. This can be confusing, especially when there are more than two persons involved in the conversation. If, however, you prefer this method of adding signatures to replies/forwards, CodeTwo Email Signatures for Office 365 allows you to do so, too.

Take advantage of the above features and customize the program to handle email signatures and disclaimers in replies and forwards exactly as you want. You can also let your users decide which signature to use in new and subsequent emails by giving them access to CodeTwo signatures directly in their Outlook.