Profiling: how the program influences your server and email flow

In this article you will learn about the effect our software has on email flow in Exchange environments.

The aim of these tests was to analyze how CodeTwo Exchange Rules Pro influences email flow and how much load the software puts on an Exchange server in terms of CPU and RAM usage. To realize this objective, the following elements were prepared:

4 different configurations of the environment (both with and without CodeTwo Exchange Rules Pro) were tested. To simulate different mail flow scenarios, emails were sent with the speed of 5, 10 and 20 mails per second (mps). You might want to know how these numbers are related to mail flow in a typical organization. For example, the speed of 20 mails per second means that:

Read on to learn more about the environment we used during the tests, and view all the results in greater detail.

For the purpose of this study, 5 configurations of the test environment were prepared:

A collection of 70 sample emails in the EML format was prepared for testing. The package included new emails and replies, which varied in content (tables, hidden and visible attachments, etc.) and size: there were 65 EML files between 4 KB and 100 KB, 4 EMLs in the 100-126 KB range and a single EML file of 1 MB.

Testing was based on internal messaging in the Exchange environment described earlier. In total, 3 types of experiments were performed. They all focused on measurements of server load and email processing times in various configurations of the test environment (see the summary in Tab. 2.)

A dedicated application picked random emails from the collection of samples. For each message, the program assigned a unique 36-character identifier (MessageId) and randomly selected 1 sender and 1 recipient from the 1000 users available in the test environment. The program then copied these messages to an Exchange Pickup directory (Pickup folder) located on the Exchange server, where they were subjected to further processing.

Three types of tests were performed:

How are these speeds related to my organization?

The speed of 20 mails per second means that:

During each 1 hour long test the program measured the CPU and RAM usage on the server. Another dedicated application analyzed email processing times and calculated average delivery speed.

Measurement of CPU and RAM usage

The influence of the Administration Panel of CodeTwo Exchange Rules Pro was not investigated, because this component is just a management console and does not take part in email processing.

Fig. 3. Analysis of the processing time of an email.

Exchange Server can process several messages at the same time. That is why average email delivery speed cannot be calculated directly from the average email processing time. To calculate the average delivery speed of messages (in mps - mails per second), the total number of messages delivered during a single test (see Fig. 4.) was divided by the duration of this test (i.e. 3600 seconds).

Fig. 4. Checking the number of messages delivered during a single test.

This section summarizes the results for all the tests. For details, see tables 3-5 at the end of this section.

The results of email processing time measurements for tests 1 and 2 are shown in Fig. 5. (for more details, see Tab. 3. and 4. at the end of this article). When emails were sent with the speed of 10 mails per second, it took 1.242 s (on average) for Exchange Server to process an internal message without any transport rules or CodeTwo software. Installation of CodeTwo Exchange Rules Pro and defining 10 signature rules in the program increased this time to 1.507 s. For 20 mps, the corresponding times were 2.233 s (Exchange only) and 2.477 s (CodeTwo Exchange Rules Pro + 10 rules). The increase in the processing time caused by our software is practically not observable for the user. There is a 1-second difference in the average email processing time when moving from 10 to 20 mps, but it is caused by the heavier load on the server (because more messages are sent), not by our application. 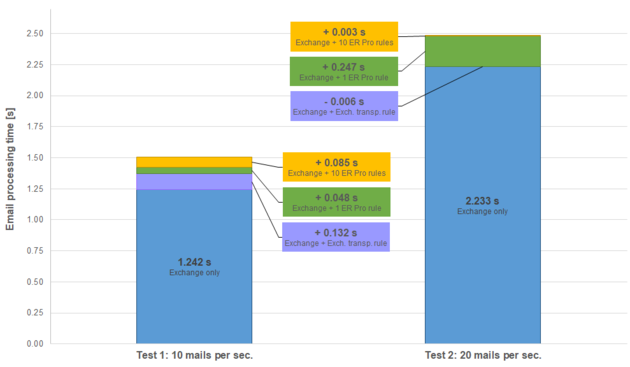 In Exchange, emails are processed asynchronously - multiple messages are processed at the same time. If you have a large number of messages, the total processing time will be similar with and without CodeTwo Exchange Rules Pro.

Here, we investigated if emails are delivered with the same speed as the speed with which they were submitted for delivery, by counting messages delivered during a single 1 hour long test. When emails were sent with the speed of 10 mps, they were delivered with the speed of 9.99 mps (Tab. 3.). For 20 mps, the measured delivery speed was 19.99 mps (Tab. 4.). It is clearly visible that increasing the number of sent messages does not influence their delivery. The small difference between the speed of sending and delivering comes from the fact that messages that were sent near the end of a test were delivered shortly after the test, and thus they were not taken into calculations.

It was also observed that CodeTwo Exchange Rules Pro does not influence email delivery - the average delivery speed was the same no matter if the program was installed or not.

The results of the CPU usage measurements for tests 1 and 2 are shown in Fig. 6. (for even more details, see Tab. 3. and 4. at the end of this article). When emails were sent with 10 mps, the CPU utilization was 2.81% for the EdgeTransport process. If one Exchange transport rule was working, this increased to 3.56%. Installing and running CodeTwo Exchange Rules Pro with 10 rules changed the CPU usage to 6.02% (this includes the additional load on the EdgeTransport service and 3 services of our software). When messages were submitted for delivery with 20 mps, the processor load was 5.83% for Exchange Server (EdgeTransport) only, and increased to 12.03% when CodeTwo Exchange Rules Pro with 10 rules was running. 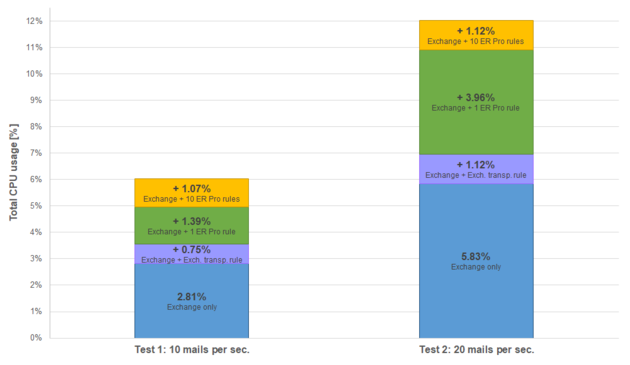 When emails were sent with 5 mps (via EWS), with CodeTwo Exchange Rules Pro running with the Sent Items Update service enabled, the software's load on CPU was 4.4% in total: 2.72% for EdgeTransport, 1.36% for the SIU service and 0.32% for the other CodeTwo services (Fig. 7.). For more details, see Tab. 5. at the end of this article.

RAM is managed by Garbage Collector and is constantly changing - several identical measurements of RAM usage might produce several different results. That is why the results described below should be treated only as an approximation.

When messages were sent with 10 mps (Fig. 8.), Exchange Server (EdgeTransport) used 727 MB on average, which was 4.4% of the whole memory (16 GB). Installing and running CodeTwo Exchange Rules Pro with 1 rule increased this value to 1018 MB (including the additional load on the EdgeTransport service and 3 services of our software), which corresponds to a rise of 1.8% in the usage of the whole available memory. When 10 signature rules were configured, the average RAM usage was 859 MB (0.8% increase in the total memory usage). When emails were sent with 20 mps (Fig. 8., right), EdgeTransport used 701 MB / 4.3% on average. With our software installed and running, the total RAM utilization increased by 1.9% (to 1023 MB) for 1 signature rule and by 1.7% (to 992 MB) for 10 signature rules. For more details, see Tab. 3. and 4. at the end of this article.

Below you can find tables with detailed results from tests 1-3.