You probably know a few of them from Ignite or IT/DevConnections. Two or three others tend to pop up in popular LinkedIn and Facebook groups. Articles by several more come up when you type an Exchange-related query in Google. And the rest – maybe you’ve never even heard of them…

Whatever the case, I present to you, 25 (+1) Exchange Server experts worth following (in semi-random order). 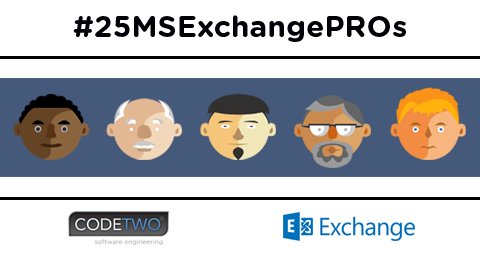 A true Exchange Server veteran. Active in the field since the early ’90s, in that time he received 12 MVP awards, published several books on the subject and became one of the leaders of the Exchange community worldwide. In his Tony Redmond’s Exchange Unwashed Blog over at Windows IT Pro you can read in-depth discussions of issues and latest developments in Office 365, Microsoft Exchange and related products, as well as occasional tutorials and troubleshooting tips.

Four-time Exchange MVP award recipient, author or co-author of several books dealing with various technical aspects of Exchange administration, but most importantly the driving spirit and main contributor to the hugely popular ExchangeServerPro.com blog and community site. On ExchangeServerPro.com you will find everything from deployment tutorials, PowerShell scripts, migration guides, feature demonstrations, troubleshooting tips, to a healthy dose of Exchange related news.

Another veteran Exchange Server MVP (but also author of several Exchange-related books, accomplished triathlonist and aviation aficionado). Like Tony Redmond, he is a Windows IT Pro contributor and co-author of the Exchange Exposed podcast. His Windows IT Pro articles delve deep into Exchange Server’s and related products’ features. Managed availability, Exchange Active Sync policies, PSTN Calling in Skype for Business – you name it, he’s probably written about it.

The subtitle of his The EXPTA {blog} might be ‘Random musings of an Exchange Certified Master & MVP’, but if you go there expecting rambling essays and abstract opinion pieces, you’ll be disappointed. Jeff is an active systems architect and The EXPTA {blog} reflects that: an overwhelming majority of posts are how-tos, troubleshooting tips, issue summaries, even occasional server assembly guides, all bearing the mark of experience from the line of fire. Reaching back to 2007, the articles add up to a virtual encyclopedia of Exchange Server knowledge that any sysadmin will be happy to learn from. And if that wasn’t enough, his name also features on a number of other expert publications.

Co-Founder of ClipTraining, contributor to Petri.com, columnist for InfoWorld (where he shares his insights on Microsoft enterprise products), founder of Conversational Geek (check out his “Conversational Migrations to Office 365” sponsored by CodeTwo).

Known as Michael ‘Van Hybrid’ – a nickname he commonly goes by in the Exchange community, as well as a dead giveaway as to one of his areas of focus. The other one is a little broader and less nickname-friendly – Michael Van Unified Communications just doesn’t have a ring to it. Jokes aside, it’s expertise in those fields that earned him three Microsoft MVP titles. For proof of it, check out the books he authored or co-authored, or just read his blog, where he also covers general Exchange/Office 365 news. PS: Along with a couple of other people on this list, he contributes to the The UC Architects podcast.

A hard-core Exchange admin, who just happens to publish books, speak at numerous conferences and receive accolades from Microsoft. His blog is like a survival guide for anyone making their way through the jungle that we know as Exchange Server. Just the essentials – an astronauts’ diet of how-tos, guides and troubleshooting tips. Very useful stuff.

Who said an administrator can’t be a developer? Next to TechNet, his blog might be the second biggest PowerShell module database available on the web.

In his company’s blog, where he is the main contributor, you will find troubleshooting guides, deployment tutorials for various aspects of hybrid environments, as well as articles on various other topics such as mobility, UC, etc.

He not only regularly covers major Exchange administration topics in popular Exchange-related websites (see below), but also co-hosts The UC Architects podcast, writes books, speaks at conferences, posts on his blog, is active in the Exchange community in the UK… all the while working at his day job. Check out his MSExchange.org and SearchExchange columns for some great Exchange and Office 365 migration and hybrid deployment guides, as well as other detailed tutorials. Or visit Steve Goodman’s Exchange & Office 365 Blog for a regular update on his activities, plus some exclusive content.

Another expert with a developer background on this list (as well as MVP, book author, conference speaker, and more…). He puts his coding skills to good use, fashioning PowerShell scripts that you can later find on Microsoft Developer Network. Apart from this, he contributes to SearchExchange, the already mentioned The UC Architects podcast, and writes a blog called EighTwOne #821 (mystery of the title explained here), where you will find regular breakdowns of Exchange-related news and occasional troubleshooting tips. Fun fact: His examples often contain references to the Blake and Mortimer comic book series.

He works for a load balancer developer, so it makes sense that his blog focuses on network architecture, hardware, server deployments, virtualizations and other related issues. Also, he’s an Exchange MCM.

Author of long-running tutorials on MSExchange.org. The most recent – “Deploying an Exchange 2013 Hybrid Lab Environment in Windows Azure” – currently at part 33. Also, he was part of the team that created questions for the Exchange 2010 MCP exams.

Head of the increasingly popular MSExchangeGuru.com website, where he and his team provide some much needed solutions for Exchange professionals (they also make very informative tutorial videos). Ratish’s articles deal with a broad scope of topics, from major ones like server architecture and migrations, to minor fixes.

9-time MVP and pioneer of Exchange multi-tenant design starting way back from Exchange 2000. His blog is full of pre- and post-migration guides that will get you through pretty much any upgrade scenario. Apart from that, he often writes about Lync, offering some great management tips, guides and tutorials.

Microsoft 365 notes from the field

So far the Exchange world has remained rigorously monotheistic, with only one Goddess in the person of Phoummala Schmitt. Her biggest contributions to the community are the Exchange Goddess blog and the #CurrentStatus YouTube series, co-hosted by Theresa Miller and Melissa Palmer. In both cases her primary topics are current phenomena disrupting enterprise IT.

Multiple Exchange MVP and founder of the IT Pro Africa community and website. His personal blog is a cross between an administrator’s toolkit and an education project aimed at spreading Exchange and Office 365 knowledge among the public. Don’t worry – the emphasis is on the former.

Also known as SuperTekBoy, he uses his superhuman knowledge of Exchange for the greater good. His frequently updated blog includes, among other articles, some very good migration and deployment guides. Definitely worth checking out.

An ex-MVP (he received the Microsoft MVP Award for Exchange Server several times between 2005 and 2012). In his blog he discusses latest Exchange and Office 365 features, and their impact on organizations and users.

He contributes to MSExchangeGuru.com, where he often writes deployment and troubleshooting guides for the latest Exchange and Office 365 products, tools and features. Fun fact: For a period of time he was the only person in the world to support EDS customers using Exchange 5.5.

A very active Office 365 MVP, with a strong focus on the latest innovations in Microsoft’s Cloud platforms. Read his blog for exhaustive reviews of new Azure and Office 365 features, but also occasional Exchange on-premises news.

One more developer on this list. His software portfolio indicates a strong interest in server security – he is the author of a mail security solution and several anti-spam products. This interest is apparent on his blog, where you will find many posts dealing with spam and malware protection. But also… at least a couple articles about email recalling.

A 10-time MVP award recipient and prolific author. He writes in English and Portuguese. The English chunk of his output consists of contributions to MSExchange.org (articles and tutorials related to enterprise email security: backups, protection, certificates, etc.) and his own website, ITProCentral.com, where he covers Exchange and Office 365 news, UC topics and provides various other solutions.

4-time Exchange MVP. His Let’s Exchange blog is an amazing resource, full of error fixes, tweaks, workaround and tips, dating back to 2009 and still regularly updated.

A member of the DirTeam.com collective and contributor to the UC Architects podcast. His DirTeam blog deals with a wide range of Exchange-related topics, but its primary focus is system and network security.

A pioneer at heart. If today Microsoft releases a new feature for one of their enterprise email platforms, there’s a high chance he’d have tested it and wrote about its ins and outs by tomorrow. That’s not to say that his blog suffers from a shortage of troubleshooting guides, tips, solutions, and all the other stuff you would expect from an Exchange expert.

CodeTwo’s very own IT animal. His articles cover every-day Exchange and Office 365 administration tasks, from transport rule management to Active Directory and Office 365 synchronization, and occasionally swerve off to general feature analyses. You can also follow his activity on IT forums such as Spiceworks.