If you combine extra placeholders and a suppressing tool of CodeTwo Exchange Rules you might be able to let your users decide which footer is to be added by the program and in each language.

New to CodeTwo? Learn more about CodeTwo Exchange Rules & try it for free
Let’s say your company is bilingual (English/Georgian) and both e-mails and footers have to be in two languages too. You will have to use additional fields in AD for each particular user when creating (or modifying) their personal information. These additional fields, as it was mentioned before, are called Exchattr and can be later used as placeholders to pull data from Active Directory. For example you can create a contact information for one user where his/her name will be in English and then add their Georgian (Mkhedruli) equivalents in, for example, Exchattr1 and Exchattr2 fields.

When designing the signature you will have to use the following placeholders then:

Let’s assume you have two rules (two templates): Signature1 (English) and Signature2 (Georgian). Open CodeTwo Exchange Rules administration panel, select your first rule (Signature1), click Edit and go to Advanced Options. When you are there, check Activate suppressing disclaimers box and then click Configure. In the resulting dialog box, select Add, and set the phrase editor as shown in the picture below. 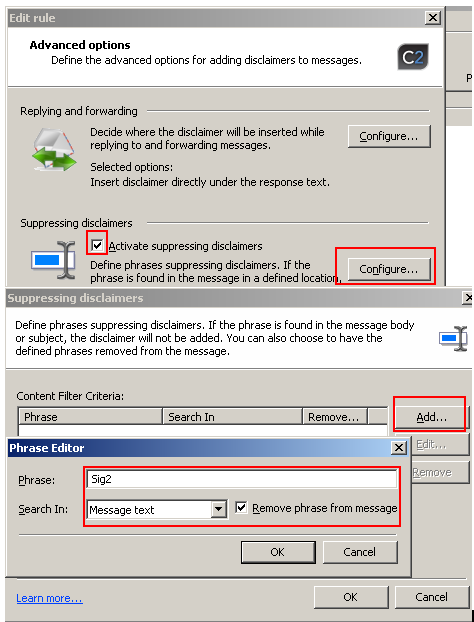 From now on, if you write Sig2 in the body of your message, it will remove this footer (which is Signature1) leaving only Signature2 appended.

You will have to do the same for the Signature2 but use Sig1 in the phrase editor.

As a result, you will have two phrases working as follows:

Obviously, the name of the phrase that suppresses a disclaimer depends only on your imagination.

It is also possible to add more ‘signature-switching words’ but then the combination of phrases would be much more complex. Again, you only have to depend on your imagination and simple mathematics.