CodeTwo Exchange Sync is the successor of CodeTwo Folder Sync, The latest release has not only got a new name but loads of new features too. It is a program for Exchange administrators who would like to effortlessly synchronize data between folders of Exchange. For example, CodeTwo Exchange Sync will let them automatically synchronize data between selected folders. Interestingly, the application allows synchronizing data from public folders to mobile devices (PDA, BlackBerry) – a feature pursued by many companies.

In One-Way Synchronization the data is synced in one direction. However, this mode has as many as 3 subcategories of sync modes:
– One-to-One,
– One-to-Many, and
– Many-to-One.

In One-Way Synchronization the user is furnished with additional features that can be used in syncing items, such as filters and modifiers. The former are used to sift the items  in the source folder(s) before syncing to  replicate to the target folder only those items that match the defined criteria. It is very convenient if you do not want to copy all items from a folder indiscriminately.

The job of modifiers, on the other hand, is to tag the synchronized items on-the-fly according to the user’s design. For example, you can have all items undergoing the sync be marked with a color category so that they stand out in the target folder and are easily singled out. Next, the application features the subject modifier that will append extra information to the items’ subject e.g. the item will end up in the target folder with the item’s owner’s name in front of its original subject. 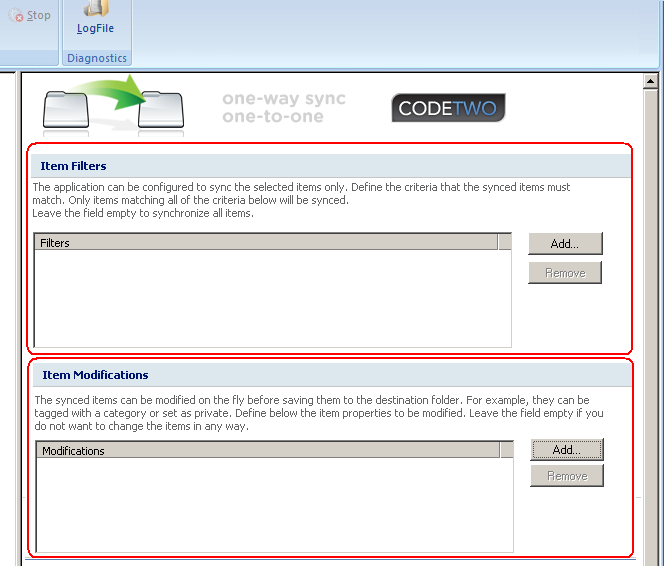 Like in our other applications (CodeTwo Public Folders to give an example), CodeTwo Exchange Sync too supports real time synchronization. All the syncing of items takes place immediately with no retention period and in the background transparently to the user. This means each user can enjoy updated data in his/her folders at all times.

The application can be downloaded and used freely for 30 days as a fully functional evaluation copy. Once the demo expires, it will ask you to activate and here’s another novelty.

A major benefit of CodeTwo Exchange Sync is that it does not need to be installed directly on the machine equipped with Exchange server 2007 / 2003 / 2000. You can install the application on another server or even a workstation.

Finally, some great news for user of the previous version 1.0 named CodeTwo Folder Sync. You get the new version absolutely free of charge. All you need to do is contact our Sales team.

One thought on “CodeTwo Exchange Sync is Shipping!”