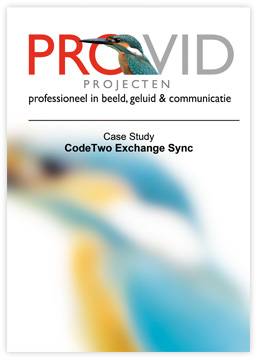 Provid Projecten specializes in providing equipment for audio-visual presentations. Their services include equipment rental as well as installations.

Provid Projecten uses Microsoft Small Business Server 2011 for hosting their company email accounts. They also have several public calendars that are used in their everyday work for planning. Since Provid Projecten employees often work outside of their office, these calendars need to be accessible from iOS and Android mobile phones. However, as mobile devices do not support viewing Exchange public folders, that resulted in various issues the company needed to resolve.

Sander van Rosmalen from Provid Projecten found CodeTwo Exchange Sync through the internet search. He desided to look closer at the program becasue of its 30-day fully functional trial option and the way the program was described by other users. Since the application was widely recommended and seemed to be able to meet Provid Projecten’s requiremnts of syncing public calendars to mobile devices, he decided to give CodeTwo Exchange Sync a try. According to Mr. van Rosmalen, the program is quick to install and extremely easy to use. The installation process was flawless and thanks to a clear and well-designed user interface, he was able to immediately follow the logic of it. The total implementation time closed up within 3 hours and in opinion of Sander van Rosmalen, its simplicity that played the main role here. “The program has no spare options and REALLY is so easy to install.”, van Rosmalen says.

CodeTwo Exchange Sync solved Provid Projecten’s problem of viewing public schedules on iOS and Android devices. Public calendars from their Small Business Server are now pushed to users’ private mailboxes by means of CodeTwo Exchange Sync and that makes them accessible from any device working with an Exchange Server account.

« Back to Customer stories