CodeTwo Exchange Migration is a tool designed to migrate source mailboxes and public folders to the chosen target location. Unlike any other software of this kind, this program performs the simplified migration, which doesn't need any extra steps, e.g. you can migrate directly from Exchange Server 2003 to Exchange Server 2013.

As far as the source data safety is concerned, the program does not delete anything. It accesses the source server data passively, which means that no data is deleted or modified on your source server. 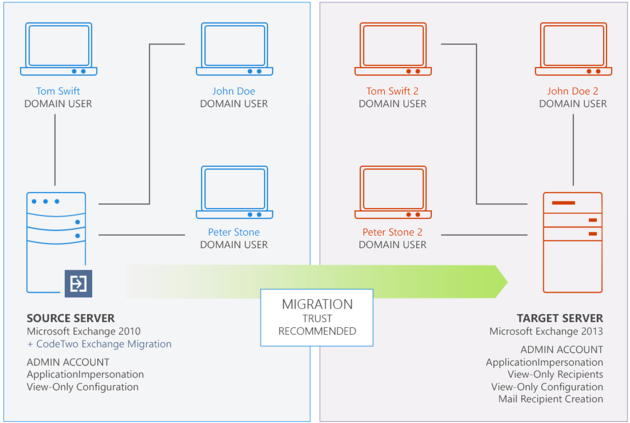 This article contains the following sections:

What type of data can be migrated using CodeTwo Exchange Migration?

There are two types of data that can be migrated from Exchange Server or Office 365:

Migration of all item types is supported when it comes to migration from Exchange Server / Office 365 via EWS or MAPI. This refers to Emails, Contacts, Calendars, Tasks, Notes, Journals, and Public Folders.

In the case of migrations from other servers (e.g. Gmail) via IMAP, only emails can be migrated.

Which migration scenarios are supported?

Be aware that a specific Service Pack (SP), Update Rollup (RU) or Cumulative Update (CU) might be required for some Exchange Server versions. See system requirements for details.

(1) Why in some cases I can only migrate cross-forest?

(2) Source connection only via MAPI

(3) Source connection only via EWS

What are the possible scenarios of executing migration based on client environments?

CodeTwo Exchange Migration can be used to migrate mailboxes within different / the same domains and even the same forest. Please study the diagrams below that show the possible migration scenarios. 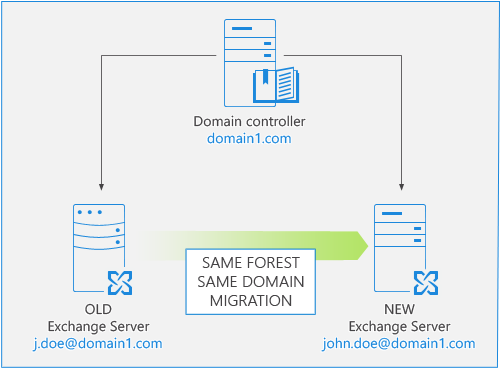 Fig. 2. Migrating mailbox within the same forest and domain. 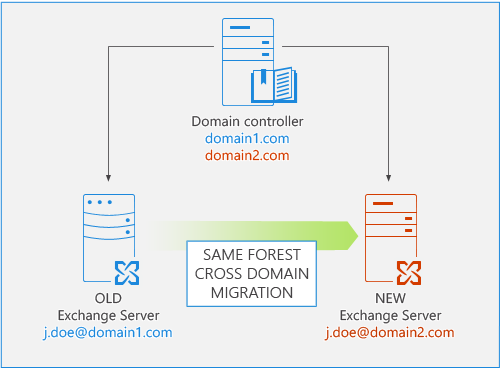 Fig. 3. Migrating mailbox within the same forest but between different domains. 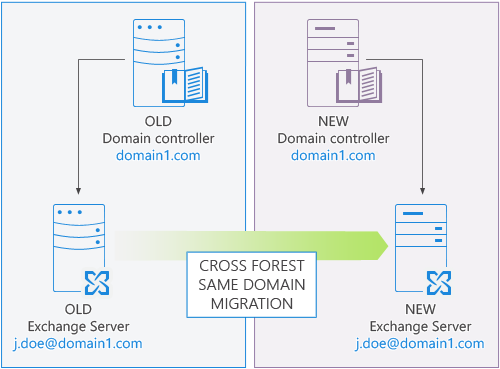 Fig. 4. Migrating mailbox between different forests but within the same domain. 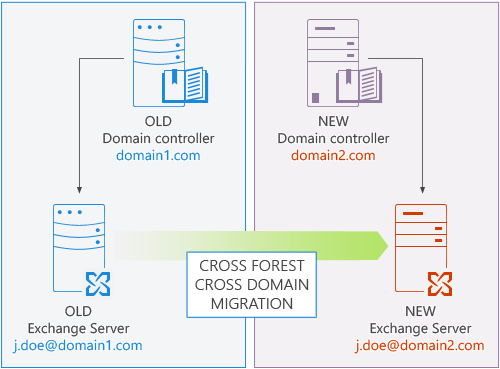 Yes, the program has a built-in Rescan feature to perform delta migrations. It can be used once the migration process is finished to check whether there are any new items on the source server and migrate them to the target server. Those items that have already been migrated, even if some changes were made to them on the source server, will not be migrated again.

Read more about the delta migration in CodeTwo Exchange Migration

What are the restrictions in terms of migrating mailboxes within the same forest and the same domain?

CodeTwo Exchange Migration can be used to migrate mailboxes within the same forest and the same domain. However, there is one restriction: you cannot use the chosen source mailbox as the target mailbox in one pair of mailboxes included in the migration process. For this reason, you need to create another user with a new mailbox or choose another existing mailbox of a different user as the target to process the migration. Note that due to Exchange restrictions, the creation of another user, whose mailbox is used as the target, is inevitable as individual users in AD cannot have two mailboxes.

For example, if you want to migrate the source mailbox mailbox1@company.com and choose the same mailbox as the target, the migration will not be possible. You will encounter duplicated items on such a mailbox instead. If, however, you create another user along the associated mailbox mailbox2@company.com, and then choose it as the target, the migration will be executed successfully.

Is it possible to migrate public folders within the same forest/domain?

No. CodeTwo Exchange Migration cannot be used to migrate public folders within the same domain in the same forest. For this reason, such migration scenario is not possible due to Exchange Servers' limitations.

How to migrate public folders?

Learn more about the architecture of public folders on Exchange 2013

By default, Exchange Web Services (EWS) of supported target Exchange Servers (2010, 2013, 2016 and 2019) limit the size of each migrated item included in source mailboxes to 30 MB per item. However, you can adjust this limit to accept items bigger than 30 MB using Exchange Management Shell. Follow this article to learn how to change the items' size limit.

Is it possible to migrate data between two servers that have a different display language?

In addition, the contents of the default Outlook folders, such as Inbox, Sent Items, Drafts, Calendar, Contacts, etc. are always migrated to their equivalents on the target server. This means that if you’re migrating, for instance, data from an Office 365 tenant set up in French to an Exchange Server set up in German, the contents of the Brouillons folder (Drafts) will be migrated to the Entwürfe folder.

When target mailboxes are created from within CodeTwo migration software, the names of such default folders will be in the language set in the target environment.

However, if you notice that some of your default folders are not migrated to their respective destinations, consult this Knowledge Base article.

Is there an option to perform dry-run migrations?

The licensing system consumes licenses for source mailboxes only (read more), so you can migrate a single source mailbox to multiple target mailboxes. Therefore, to perform a dry-run migration, you can create a test mailbox in the target environment and use it to migrate data from the chosen source mailbox. Once finished, you can reset the migration state and change the target mailbox to the right one. Be advised that if you are using the trial version of the program, you can only migrate up to 10 items per mailbox folder.

Is multi-factor authentication supported when migrating from Office 365?

Yes. CodeTwo Exchange Migration supports multi-factor authentication (MFA) for Office 365. MFA is an effective security measure that prevents unauthorized access to your account. Once enabled, each time you log in to Office 365 tenant with your password, you will be asked to confirm your identity by providing a verification code which you receive via text message, phone call or Microsoft Authenticator app.

Does the program support legacy authentication protocols when connecting to Office 365?

No, CodeTwo Exchange Migration uses OAuth 2.0 authorization protocol to connect to your Office 365 tenant. The legacy (or basic) authentication is being deprecated by Microsoft and will be turned off on October 13, 2020.

While basic authentication requires providing a username and password in the program to access Office 365, with OAuth 2.0 your credentials are safe, as you provide them directly on the Azure AD sign-in page. That way, your credentials never accessed by our software (or any other third party) but are forwarded directly to Microsoft servers.