If you’ve ever tried to install Exchange 2013 in a forest, which contains servers running Exchange 2003, you already know that in this scenario the Readiness Checks tool always returns an error (like the one on the image below) and does not give you an option to proceed. Any further attempts to run Exchange 2003 and 2013 in one domain will just leave you ending up in the same blind alley. See this Microsoft post for more. 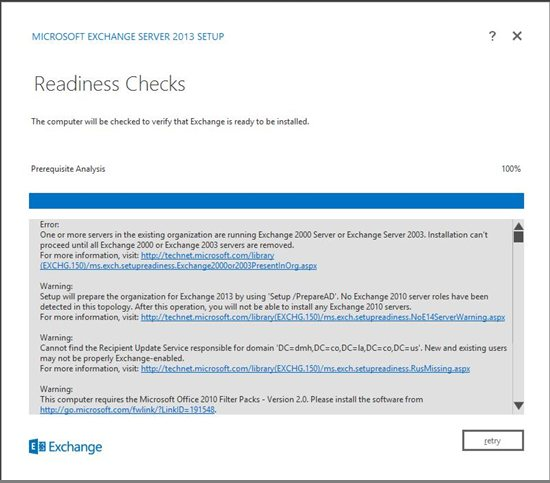 You have to migrate to Exchange 2013 somehow, though. So what’s next?

First let’s get the most arduous methods out of the way:

Due to the extensive effort needed to apply the above methods, they should only be attempted if your budget for the migration is minimal. Otherwise, you should consider employing more user-friendly approaches, such as:

The main advantages of this method are that you can do it within your existing domain, and with little or no impact on end-users. The latter is achieved thanks to the possibility of maintaining coexistence Exchange 2003 – Exchange 2010 and Exchange 2010 – Exchange 2013 deployments.